There was once a point where whether you were a teenager sneaking out of the house to go the party or had permission to go to the school dance or even if you were on campus or in the ‘hood or making your way in your cleanest suits and dresses to a New Year’s Ball… One question was unavoidable.  And with this past-time of wondering what the party vibe-setter was going to do and curiously wondering the soundtrack of the night – Seaspot introduces a 21st century answer from the minds, musings and voices of the stars themselves, as Seaspot also asks – ‘Who’s The DJ?  Rock with us…

He’s one of Seattle and the Pacific Northwest’s most recognized and respected DJs – and he has been a certified jet-setting crowd-rocker.  In the clubs, on the radio and for big-time sporting and entertainment events, DJ B-Mello is one of the go-to-guys behind the music that makes people move – and he’s been going strong since the ’80s and is still going strong as resident DJ at Bellingham, Washington’s premier nightclub, The Underground.  Making the move from his traditional hub of The 206, he has transitioned up the freeway near Canada to The 360-North.  With accolades like 2012’s MCC Best Seattle DJ, 2014 Seattle Sound Music Awards Mix Master Award and King 5 News ‘Best Personality’ On Twitter for 2015 – let’s find out… Who’s The DJ?

I first wanted to become a DJ in ’83 and used to listen to tons of NY radio tapes and that basically shaped me.  I really became a working DJ in ’87 spinning at the NCO club at Fairchild AFB in Spokane, WA. We did Eastern’s Black Student Union dances and tons of house, hotel and hall parties over the next 2 years.

My mentors basically were Jeff Ebia, Johnnie Vee and [‘Nasty’] Nes Rodriguez in that order.  Jeff taught me the basics and got me into buying records, Johnnie Vee made me obsessive with buying records and taught me so many technical aspects and how to read a crowd. Nasty Nes taught me how to be professional and take radio seriously. He also gave me my break into radio and made it so I never had to buy records again unless I wanted something rare [that] I missed.

Vinyl and Digital. Never really was a CD guy.  Went straight from records to control records and Serato Scratch Live in ’05 – then in ’15 I went to Serato DJ.  If I’m spinning control vinyl I use 2 Technic 1200s and a Pioneer S9 or in the club I’m strictly digital & I use a Numark NS7iii.

I’m DJ B-Mello – known to be a Hip-Hop DJ since I really made a big name for myself on underground radio & mixtapes in the 90s.  I’m really can rock whatever.  I come from the days when everything was played to rock the party and I am also known for my blend tapes. Nowadays, I would be considered an “Open Format” and a “Mash Up” DJ.  I’m basically a well rounded DJ who can do it all.  I’ve always concentrated on making my mixes clean in the club setting and on the radio.  I was always known as a street, radio or mixtape DJ but I’ve morphed more into a Top 40/Hip-Hop guy recently.

I most admire guys who I came up with that stuck with it & still do it to this day.  The ones that continue to evolve and adapt to all of the new challenges.  Also the guys that are making a decent living but not getting all of the shine that they deserve and the ones that are doing it strictly for the love of the art of Deejaying!

My favorite changes would be how easy it is to go spin.  You normally can hop on a plane with just your backpack rather than having to check tons of flight cases.  You can basically show up at a venue & plug in and play – in most cases these days. You also have access to way more music because of carrying digital libraries.  It’s a double edge sword though.  The thing I don’t like is everyone and their Mom can download music and you end up hearing crappy versions and bad quality music played by unqualified people.  The overall quality has suffered and celebrities or anybody who has notoriety is quick to call themselves a DJ and go book a big gig to play out.

One of my most memorable music moments was when I was DJing the Def Comedy Jam.  Bernie Mac (RIP) had assured me he was gonna blow me up and introduced me by hyping me up so much that when the curtains came up I was juggling “Soul Clap” (Showbiz & AG) and when I dropped “Flashlight” (Parliament) and the lights came on the crowd went nuts and it was showtime.  I realized how much that old record could make people feel energized.  I had a routine and ran through a bunch of joints but it was an amazing reaction I could never duplicate.

A DJ must be able to mix and read a crowd.  Everything else is extra in my opinion.  I think a DJ also must evolve and stay up on music!

My favorite crowd is one that’s open to all kinds of music and doesn’t mind waiting for you to play their favorites.  I really like New York, because I think for the most part people seem to have more knowledge of classics.  I played Too Short – “Blow The Whistle” for an 18+ crowd in Bellingham and they could’ve cared less for it that night.  Imagine if I dropped James Brown or Kool and the Gang. 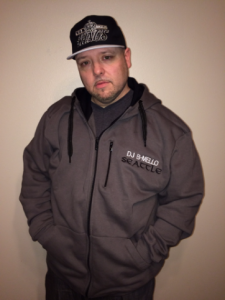