The Second City is actually second to none when it comes to dope DJs… If you love house, techno and all of the dozens of offshoots extending from what emerged out of Chicago (and Detroit, though this feature is not about Motown just yet), then you already know the story.  From Derrick Carter, Mark Farina, Felix Da Housecat and countless and nameless turntable talents comes one of the turntablest champions – officially.  Champion is not just a description when being graced by the skills of DJ Ambideckstriks – he is an official competitor and battle-tested audience approved legend.  And the forever Chicagoan soundman has changed his address to The 253, calling Tacoma home since about 2014.  He likes it so far… And what’s better is he has not stopped rocking.

A chef by nature and desire, DJ Ambideckstriks is most known for his uncanny ability to make musical menudo and cut and chop beats with the best of our soundbwoys and gals.  A true aficionado and lover of House music, he enjoys eclectic and original sounds – going above and beyond the boxes that society commonly adheres to.  As a member of CTA (Chicago Turntablist Authority) and as a lone wolf, the man has rocked the DMCs as a finalist and been through a myriad of DJ crucibles which speak to his position as one of the global officials… In the puget sound he has made his way up and down the freeway performing at benefits, special events (Hip Hop 4 The Homeless) and continues to dedicate himself in the culinary arts.

Upon meeting him, I was immediately struck by his amazing talent and rare humility.  He speaks with his hands, but has a great conversation and enjoys the company of party people, music lovers and his friends.  Enjoy the flavor, but don’t bite the style as DJ Ambideckstriks drops science for those who may not know, Who’s The DJ?! 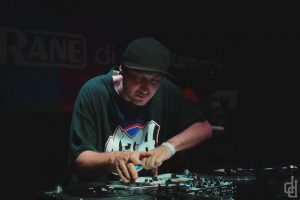 1) When and how did you get interested in and become a DJ?

I got interested in becoming a DJ about 1995. I loved house music and got started collecting records and eventually bought turntables and started mixing.

The most influential mentor that i had was  Adam Chunkabud Maljan who was responsible for a few legendary Chicago house tracks including” Zig Zag” and Taxi C.A.B. He passed away last year and is sorely missed in the Chicago Dj community.

I have used only turntables for as long as I’ve been Djing. I used only vinyl records until I became more familiar with serato and now i use that as well. My opinion about Djing is that you can use whatever you like to play music. There are many different styles and many different ways to achieve the sound you want. I have no problems with any Dj setup or how they play their sets.

I would consider myself a house music Dj. I have also always been into turntablism and am probably more known for doing battles. The last few years i have built up a resume that is surprising even to myself doing competitions. But I think my heart is with mixing house music.

Its hard to say who I admire… I would say DJ Vekked is someone I can say I admire. He has incredible talent but very little ego.

6.) Favorite and least favorite changes in the DJ world…

My favorite change in the Dj world has been Serato. I like being able to put my own scratch and battle routines together as if I were making my own records. This is something I used to dream about being able to do before the technology came out. It may also ironically be my least favorite change in the DJ world because in my opinion it also  gives people the opportunity to dumb everything down.

7.) My most memorable music moment is…

I think the most memorable music moment was to be on the world DMC stage competing in London with my Dj crew CTA (Chicago Turntablist Authority). We took 4th place in the world in the team category. We were also the first team from Chicago to ever make it there so that felt like a huge accomplishment to me. 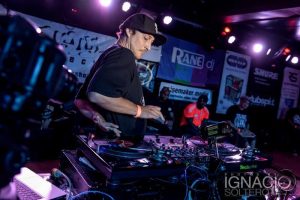 A Dj must make the people feel the music.

This is 5 of my favorite tracks that never leave my playlist. (house music so bear with me)  (1.) Cajmere Brighter days (underground goodies mix)

10.) Favorite crowd, event-type and city to DJ in…

My favorite city to Dj in is Chicago at a house music event. I love diversity and different styles but Chicago house is my flavor and house heads are my favorite type of crowd.

At the moment I have no residencies, projects or gigs coming up. I have been in chill mode and I am enjoying a nice break from working as a Dj.

My opinion of radio in 2017 is not a nice one. I lean to college radio shows or anything a little different or abstract. The same pop songs over and over again may be for some people and thats fine but its not for me.

My favorite radio station ever is V103 in Chi. As far as Djs mixing on the radio its the best station Ive ever listened to. I even got the I heart radio app so I can listen to it wherever. When Djs mix on that station they mix a lot of different genres and there doesn’t seem to be a playlist that they are going off of.

I think Dj craze DMC 1998 was the best live performance by a Dj. I just watched it one more time before i answered this and it is still the shit.

I am Dj Ambideckstriks of the Chicago Turntablist Authority.

WHAT THE DILLY, YO?! with JOSE S. GUTIERREZ JR.: KAEPERNICK STILL AIN’T GOT A FOOTBALL JOBBY JOB?!?!

WHAT THE DILLY, YO?! with JOSE S. GUTIERREZ JR.: KAEPERNICK STILL AIN'T GOT A FOOTBALL JOBBY JOB?!?!