by Jose Gutierrez
in Music, Lifestyle
0

People toss around the words legend, genius, boss and phenom – so I won’t do that.  But when it comes to DJ Tee, he would not say much to brag about himself in most settings (other than a battle), but he is all of the above.  As one of the Pacific Northwest’s most prolific DJs, the Oakland, CA native calls Lapwai, Idaho (The Rez) home.  And from this tiny dot on the map, DJ Tee has represented Hip-Hop culture in this central region of Idaho and the southeastern region of Washington state for more than two decades – bonafide.

Personally, I met DJ Tee and his remarkable legend when he was slanging mixtapes in Pullman, Washington at the Stephenson Dormitory towers during my Freshman year at Washington State University.  This feature is not at all about this chance encounter with DJ Tee, but as a boy from The Bay, LA and Western Washington who grew up with Hip-Hop and found sticks and wheat fields during my first two weeks in college, DJ Tee’s hustle in the dorm hallways reaffirmed to me that Hip-Hop is truly everywhere.

It is important to note that DJ Tee was part of a contingent of DJs in the inland empire northwest who kept DJing active in the ‘countrysides’ of Washington and Idaho – not only with WaxFX DJs and Groove Foundation, but as part of the only radio station to play 24-hours of Hip Hop on KZUU 90.7 in the late ’90s, with the legendary Hip-Hop Sunday programming schedule.  With his own clothing line (Native Hip-Hop), dozens (no exaggeration) of official (quality) mixtapes under his belt, multiple radio mix show and hosting gigs and parties galore that have left party people clamoring in his wake – DJ Tee is an official DJ aficionado, who studies, practices, admires and advances the DJ, Hip-Hop and indigenous cultures – and he always, but always, “Keeps It REZ”… Let’s find out from his own mouth piece, Who’s The DJ?

1) When and how did you first get interested in and become a DJ?

I first got interested in DJing by being in Oakland, CA.  I used to listen to KPOO 89.5 FM (San Francisco) and dub mixes off the radio.  I attended a summer youth program at The Friendship House (Native American Center) and they taught us to Break Dance among the other aspects of Hip Hop Culture.

My mentor is Allen Pinkham Jr. He used to DJ in Phoenix, Az with a DJ named “Flex.” I seen DJing being done at China Town in San Francisco but Al had Technics, radio shack mixers and crates for me to practice on – in Idaho (laughs)!  As far as who I looked up to performance wise and cut wise it has to be Jam Master Jay. (R.I.P.)

I am forever diggin’ in the crates for that hot sound production wise, sample wise and for all around inspiration but I now DJ with Serato.  No controllers for me ever (laughs)!  Well, really. . . (Ha ha) I try to master it all when it comes to DJin’.

I started off strictly Hip Hop and breakbeats, but got heavily involved with the battle scene in the late 90’s.  I mean the whole time I was party rocking, spinning ie. Old Skool, Break Dance Jams and Rap, but focused on battling and showcasing my skills.  I also kept in touch with what the listeners wanted by doing stints at College Radio on Stations – KUOI 89.3 FM – Moscow, ID and KZUU 90.7 FM – Pullman, WA.  All these elements have made me a “Genre Smash” Dj.  I try to mix in a lil’ bit of everything depending on the crowd. 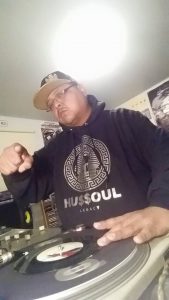 I most admire that we never know it all in DJ Culture and it is forever a learning process as with any of the Elements of Hip Hop Culture.  As far as DJ’s go, at the moment I admire DJ Jazzy Jeff.  He has kept it real all these years and is still doing it on a major level. “RESPECT.”

My favorite thing is that DJin’ can’t be faked.  The average DJ fan/supporter now realizes when people are faking it. The thang that i don’t like is that it doesn’t take much to be a music provider anymore.  Back in the day we had to hustle, struggle & quickly develop work ethic just to get 2 turntables, mixer, 2 copies of music etc. A music provider just gets a laptop and is all set. (laughs)!
DJing in a bar/club type setting playlist

My favorite crowd/place to DJ is ‘Any Rez U.S.A.’  We are all different tribes, backgrounds and have different beliefs but musically it’s “one nation under a groove.”

Peace, I am Jamie Thomas aka DJ Tee of the Lapwai people.  Much respect to those who continue to inspire me – Kun Luv, Zulu Nation, DJ B-Mello, DJ Luvva J, Dj Budget $ and Mike Schubert.