If you claim to love Hip-Hop and listen to Hip-Hop on the radio in the Pacific Northwest – this DJ is at the foundation of why.  Of course, Hip-Hop would have eventually made its way to the Pacific Northwest and more specifically Seattle and Tacoma in the Puget Sound.  But too often people are overlooked for their significant contributions.  Nestor Rodriguez aka Nasty Nes stands at the foundation of the Hip-Hop and Rap culture and industry in the Pacific Northwest.  From breaking records, playing records, interviewing, networking and making things happen… Nasty Nes is THE MAN.  And that is not a generic descriptor – he truly is.  From being recognized (and hung up on, comedically) by NWA and included on Easy-E’s debut album, Easy Duz It (1988, listen to “Radio” and listen up), Nes was and is a factor.  Pay attention.

In 1980, Nes kicked the door down by launching the first ever Hip-Hop radio show on the west coast with his groundbreaking program, Fresh Tracks, on Seattle’s 1250 KFOX-AM.  That was the beginning – Nes would continue as a professional broadcaster with a radio career of more than 20 years having made stops at KFOX, KCMU, KUBE, KMEL, PowersRadio.com and the Original 1580 KDAY in Los Angeles.

Nes is one of the original impresarios of Hip-Hop and Rap – period, having dipped into multiple games.  In 1985 Yes’ namesake (‘Nasty’) put the first half of the name of the most significant Rap label in Pacific Northwest history – still – when he and his homeboy, Sir Mix-A-Lot founded NastyMix Records.  Their chemistry resulted in two classic albums, Swass (certified Gold) and Welcome To The Seminar (certified Platinum).

Although he is a DJ, as noted previously – he is an impresario.  Multi-talented with multiple interests and achievements.  Leading us to his time as a student at the original Bruce Lee “Jun Fan Gung-Fu Institute since age 13.  His adoration of Master Lee is obvious and he would follow in the master’s footsteps as Nes is also a Hollywood-credited actor, having appeared in the following films and programs: House Party 4, Kung Pow!  Enter The Fist and ER.  Nes continues to stay active after having been Rap Editor at HITS Magazine, he is now Chief Executive Officer of the premiere online college Rap radio trade organization, Rapattacklives.com.  He had a brief return to radio, hosting the Rap Attack radio show with his co-host, DJ 3rd Degree before PowersRadio folded in May 2017 and he is currently working as a consultant with Seattle’s The High Children and the Bay Area’s Kritta, ‘hoping to take them both to certified RIAA Gold & Platinum status’.

You know he gets busy – the resume speaks for itself – Nes has paved the way for himself and dozens of other people who have made money and careers in the entertainment and media industries.  He inspired me and many others who can testify personally and all these achievements  while maintaining a charming, humble, approachable and personable demeanor – very rare characteristics in a popularity-driven industry.  Being a legend and carrying that title carries a lot of weight and responsibility – a soundman at that.  Some act like they know, some know, some wonder and many still ask, “Who’s The DJ?!”. 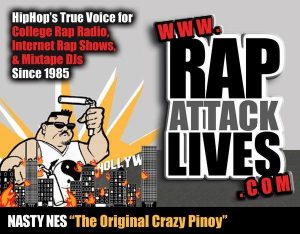 Back in the late 70’s, I was invited to answer request lines on Ed Locke’s radio show on Seattle’s 1250 KYAC. I was close friends with Ed’s sister, Eddi Locke who used to cut my hair. That night on KYAC answering the request lines, I couldn’t believe all the single females calling on the request lines. I was only 16 years old so my hormones were on full blast! I asked Ed how can I get a job playing the music I love & picking up women over the request lines plus get a paycheck? His advice was to enroll at Bellevue Communtiy College after I graduate from high school (Roosevelt Class of ’79) take a Communication course & learn to be on the air at their KBCS radio station! It turned out that out of all my classes, Communications was the only class I got A’s in plus KBCS said I sounded a lot like Ed Locke on KYAC. The timing was perfect, KYAC was about to get sold & by 1980 KFOX was born & that’s when I landed my first radio job. I was 18 years old.

2) Who were your mentors?

During the late 70’s and 80’s, on air DJ’s I looked up to and tried to imitate their on air sound and style included KYAC’s legendary and late Robert L. Scott, Ed Locke and Greg Collins aka Mr Sunday. Mr Sunday had a show on KYAC on Sunday afternoons and also worked at TJ’s Menswear, Mon-Fri. He sounded so smooth on the air and was the best dressed white dude at TJ’s! While everyone shopped for the dopest clothes at TJ’s, I’d go there just to talk to Mr Sunday and learn from him. I also admired New York’s legendary a d the late Mr Magic from WBLS with his show, “Rap Attack.” When it came to turntables and mixing, Cameron Paul, Grandmaster Flash,Grandmixer GMS, DJ Punish, Silver Shadow D, DST, Mixmaster ICE, Seattle’s Mike Joyce a nd Sir Mix-A-Lot.

I still kept about 2000 of my classics only vinyl, I’ve got a huge collection of CD’s and because I still stay relevant with what’s going on now, I deal a lot with MP3’s.

I’ve been known as Seattle’s Original MasterMixer back in 1980 and now I get referred to as Seattle’s Godfather of Hip Hop! I introduced Hip-Hop to Seattle back in 1980, I aired my mastermixes on KFOX back in 1980-1988 when really no one else was doing them on the radio but just in the clubs. I debuted KUBE 93’s Live Hot Mix show in 1992. My on air style is very personable. In the early years I used to pretend the mic was a very, very fine looking lady. Now when I talk on the mic I pretend it’s my best friend who I truly care about and care about the music I’m playing for him or her.

Friends and fans who still acknowledge me and remember me for my contributions to Hip Hop and breaking new music first from pop, dance to R&B on the Seattle airwaves.

I was a part of the DJ era where we carried crates of vinyl to our gigs. Now all your music is digital and in a laptop. Least favorite now is EVERYONE is a DJ and doing gigs for as low as $200.00. Mixing to the new heads is watching the meters match in the middle of your Serato screen. Trap music and mumble rap has taken over. You can’t break new music on the radio anymore. DJ’s on radio have to follow a format. If that had happened in my days, you’d never hear Eazy-E, NWA, Sir Mix-A-Lot, Public Enemy, Eric B & Rakim and the list goes on and on!

…Not just love one genre of music but love and have knowledge of all music. For example did you know I love the Beatles, Carpenters, The Osmond Brothers, Stylistics, The Bee Gees, Glan Campbell, Elvis Presley and Neil Sedaka to name a few?

In the 80’s. The Seattle Center Exhibition Hall’s “ALL CITY DANCES!”

…happy my predictions of playing Rap and Sir Mix-A-Lot on the radio came true. In 1980, KFOX was getting  hate mail saying Rap Music is a fad. I said in 10-20 years it’ll be the biggest genre of music! In 2017 just got the news that Hip Hop is the Number One selling and listened to music.

I also remember selected industry heads back in 1985 telling me Sir Mix-A-Lot will ONLY hit in Seattle where there are just trees, horses and rain. Well guess what?

Last but not least, I am happy that I quit smoking, quit drinking alcohol, quit drugs, using profanity, survived a heart attack, am now a Grandfather, about to get married in October 2017 and I put Christ Number One in my life!