by blue
in Music
0

Stream Papa Black Davinci’s new “Trap EMO” on all platforms. The single featuring “Lewie” was released under VL Records on February 25th, 2022, and is the prelude to his upcoming project due in the fourth quarter.  The Ray1of1-produced track was mixed by Joey Donahue and mastered by GS Mastering of Los Angeles, CA.

“TRAPM EMO” was motivated by more than disputes Davinci has had with his brothers. When he originally wrote the song, his lyrical delivery was monotone. 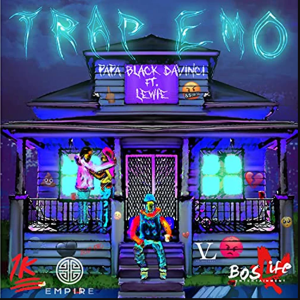 But when he got in the booth, he started yelling at the mic, releasing a fury of indignation and determination to triumph over the obstacles he was confronted with at the time.

The single’s title begs explanation: Davinci says, “Trapping is about grinding and hustling, while your chest is poked out. My title also comes from the emotion I exhibited on the song. ‘EMO’ is short for emotion.”  Contrary to the general opinion that men don’t readily express their emotions, Davinci contends that men are capable of harboring quite a few of them. To assist him in vocally depicting this, he recruited his managed artist of two years, Lewie. Davinci says there were not enough words in the English language for the duo to convey his message.  Davinci says Lewie contributes to the single, a unique singing-rapper style of artistry, juxtaposing Davinci’s gritty style in a balanced way.  “Lewie has tremendous ambition and drive,” Davinci says. In sharing similar childhoods, Lewie was able to easily tap into the sound he was aiming to deliver.  Despite the context of the song being about challenging relationships, it manages to be an
artistic elixir of casual instrumentation and raw, street emotion.