So You Think You Can Parade

It’s 4:15am and my alarm goes off on a SATURDAY. Why? Usually at 4:15am on a Saturday in the city of Chicago I’m possibly just leaving a club or restaurant. In this case I’m leaving my house to go set up about eight or nine lawn chairs downtown Seattle on fourth street. Wiping my eyes I glance over at my girlfriend and she is smirking at me. She raises up and says “It’s Torchlight!!!”

To a native Seattleite this a day you have been waiting for, but for this native Chicagoan now living in Seattle it’s a christening for my new start in the Emerald City. This would be my first Torchlight. I will go on record by saying that this will not be my last.

Who gets up at 4:15am to go set up their own chairs in their cities downtown area where every person known to man will likely get up, walk past and say “ahh, here is a couple of brand new chairs for me!” Well after arriving downtown on 4th street and seeing love seats, sofas, lawn chairs, dining room chairs and more, I guess there is a code that Seattleites live by that says “When there is a parade no sitting apparatuses of any kind will be stolen, moved or vandalized by anyone.” Sections of streets were roped off with twine, vine, chains, old video game cables tied together and more. My reaction when seeing this to my girlfriend was “so this is how y’all go?” Her being a native of Seattle for over 30+ years she simply said “Parades are serious.”

Just how serious are parades? In the past two months I have been to a total of seven parades here in the Seattle metro area. We never had to get there at 4am to place chairs down but we did have to get to the parade pretty early to secure seats right next to the grand stand. I will continue to talk about my $9.95 bargain I picked up from Sam Walton’s Supermarket because I’ve already used it past its suggested worth. We set our seats very close, if not right next to the grand stands because the acts in the parade perform at the grand stands for a group of judges. Go figure, drill teams, marching bands and even pirates are judged and given trophies and plaques. Did you guys know this? Hell I didn’t. After seven previous parades you would think I would be ready for Torchlight. I was mistaken.

Remember I told you guys we got up at 4:15am to get things ready for Torchlight? By 4:45 we were downtown and after turning onto 4th street from Seneca Ave we drove down until we saw what? The Grand stand! It was incredible! Two sides of grand stands where possibly two to three hundred people could sit. Construction workers and engineers were setting up the stands along with places for TV equipment and more. Here I was with my jaw dropped getting out of my car with my flashers on and roping my chairs between two light poles with twine I purchased for free from IKEA (Thank you IKEA). Ok the chairs are down and it’s time to leave. I won’t see my seat until about 5pm. That’s twelve hours from when we sat the chairs down.
When we returned to our chairs at 5pm and the event planners had placed up railings along the street where our chairs were placed. They instructed us that we had to move our chairs because they were closing off the entire section of 4th street where we were sitting. My girlfriend and her best girlfriend were pissed but kept a level head enough to to get some people involved to try to help us out since we had our seats in that section since 4:45am. Needless to say, the event staff definitely needs to put up signs for areas where VIP sections and Officers sections will be. We were placed on the same street about 25 feet from where we sat our chairs. Problem solved. Along with about 100 other people in that section we were all satisfied and ready to pre game for the parade.
Do you even know what parade pre game is? Well for us it was at least four things. One, having a discussion with the people in back of you so that you both are in agreeable about no one coming in front of you. Two, grabbing food or having food is a must. Three, understanding where public restrooms and port-a-potties were and four, pushing your personal turn-up button so you are super excited about the parade. Four the next two hours we pregamed until the parade started. 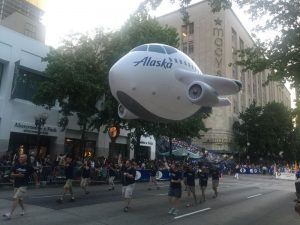 What an amazing parade! The Torchlight was presented and Chris Pratt and Anna Faris along with their son kicked off the parade. Alaska Airlines was the sponsor and they put on a show with the stewardesses and airplane controllers. The mayor, other government officials and our US military brought their personnel, marching bands and more. I had fun yelling out the names of the Police Chief, Mayor, Military officers and Queens from various pageants and nationalities. I loved the drill teams; from The Dolls who gave us an electrifying performance of classy and sophisticated dancing and drumming to the North Queens military style marching that was precise and focused on timing. The Seahawks band and cheerleaders stole the show along with the All City Band. The Seahawks band had the entire crowd dancing and yelling out “Sea…..HAWKS!!!” something awesome if you are a Seahawks fan (remember I’m from Chicago #GoBears). My personal favorites were the Seattle Clowns and the Pirates! The clowns come by and give the kids candy, stickers and a bath. The clowns spray water from a huge cement truck filled with water. While the Pirates rolled through the streets with double cannons booming causing objects to shake and people to cover their ears. An amazing day, that I will never forget. If at first you don’t believe in parades, try the Torchlight.

“Not the One” the New Single from Sabrie Tramble

"Not the One" the New Single from Sabrie Tramble