August 16, 2017 – In a statement from a Spotify spokeswoman, the mega-streaming service has today removed music and artists who have been identified as “hate groups” by the Southern Poverty Law Center and identified in the article “I Just Found 27 White Supremacist Hate Bands” in trade publication.

The news seems to come at no surprise following what is being reported as the most well-attended ‘White Nationalist’, ‘White Supremacist’ and/or ‘White Power’ rally in nearly two decades this past weekend in Charlottesville, Virginia – where reports and footage of several violent skirmishes, a vehicular assaulted resulting in dozens of injuries and the death of Heather Heyer, an activist, and fallout from a disorganized at best public response from President Trump was witnessed.

Spotify, additionally announced that it will not play or carry music that delivers “illegal content or material that favors hatred or incites violence against race, religion, sexuality or the like…”  The move could set a precedent that may swing open the doors of possibility where many artists could be identified for ‘questionable’ lyrics where race, violence and sexual language is of mention – immediately, groups like Dead Prez, Public Enemy, NWA, Guns and Roses and many more could be impacted by this move. 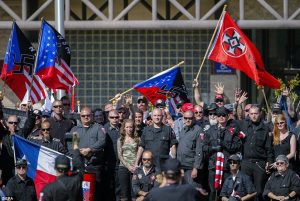 In addition to installing a more close monitoring system of the tens of millions of tracks and thousands of artists currently streaming on Spotify, it has pushed forward a playlist called, “Patriotic Passion” filled with music that celebrates America with songs by artists like Lady Gaga, Jimi Hendrix and Khalid.

Spotify reports that most of the groups, now banned, on the streaming service had low numbers of plays.  Historically, in speculation, this is the type of organizational and public move that can compel more inquiry and popularity as experienced by music from groups like 2 Live Crew and famously with NWA’s “F**k The Police”, which was publicly cited for offensive lyrics by the Federal Bureau of Investigation – a government agency.  The looming question remains, how does this move by a private corporation impact the very U.S. American notion of ‘Freedom of Speech and where does this step begin and end