REVIEW & REFLECTION: A TRIBE CALLED QUEST – WE GOT IT FROM HERE… THANK YOU FOR YOUR SERVICE 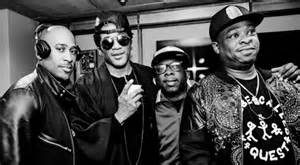 LA Reid, a few months back, slipped in an interview that Tribe Called Quest was going to release an album in November. About a month later Q-tip confirmed it when he posted a letter stating that Tribe was back and that this record was going to be the sendoff for the group.  In this day and age when albums and movies are available before they even materialize this announcement hit straight out of left field.  Being that the group had gone through its ups and downs and recently was reeling from the death of Phife, the thought of a final album after 18 years was met with skepticism, hope and yet wondering if it was just a cash grab.  Tribe finally releasing another album is on the level of The Beatles reuniting, but as we grow older we realize that bands get back together, we attempt to relive our youth and the memories are usually better than what is manifested.

A year ago, Tribe was working with Get On Down to release a 45 box set of their first album for its 25th anniversary.  The group came together to do some promo, rock with Jimmy Fallon and take a victory lap as they celebrated “Peoples Instinctive Travels and the Paths of Rhythm.”  The energy and high from this celebration led them to work on some new music together at Q-Tip’s studio.  While in the midst of production, Phife passed away from complications with his lifelong fight with diabetes.  The album could have been scrapped but, with the spirit of their fallen soldier, they enlisted other Tribe affiliated emcees like Busta Rhymes and Consequence to fill in the gaps.

Even with everything on paper sounding like it would be dope, I was still hesitant.  I desperately wanted to hear it, but was worried it was going to be like a “George Lucas” letdown.  The pre-orders were announced along with the cover art and I let it slide. I just thought, “meh… I’ll cop it once it finally hits stores.” Then the November 8th general election hit along with the Trump victory many of us weren’t expecting. As many of us were shocked, I looked for a silver lining in the form of Tribe‘s album dropping and the fact that they would be on SNL with Dave Chappelle  (at least there’s that to look forward to…)

I then pre-ordered the album hours before it was released, went to bed and woke up on Veteran’s Day to an email saying that Tribe‘s “We Got it From Here… Thank You 4 Your Service” was ready.  It was exactly what I needed to hear, that day, that week and that moment. To some the album is a glimpse of what has been bubbling to the surface over the last couple years, but to many it’s a story that has been known for hundreds of years. “The Space Program” and “We The People…” kick off the album letting you know that Tribe is BACK and as one hand is throwing up a peace sign, the other is a clenched fist.  The chorus to “We The People” plays as a sobering response to the message of the President Elect’s campaign and noisemakers.

When I first heard the opening tracks I honestly got chills and teared up as a new soundtrack to the disenfranchised played out over the next hour. It was almost as if Tip, Phife, Jarobi and the usual suspects looked into a crystal ball and decided their send off would be a love letter to us all as they handed the torch to a new generation of emcees like Kendrick to continue along the “Paths of Rhythm” for us all. 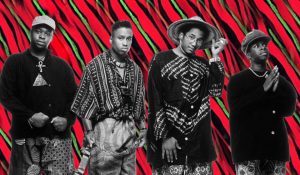 “We Got it From Here…” is a goodbye to their lost soldier, a letter to the future generation and a wake up call to those that have thought we’ve traveled so far only to realize we still have many steps to take. The album’s title and release on Veteran’s Day serves almost as a statement saying they’re going to help lead us into this new era. Tribe has ignited this incoming administration with its first protest record and like Lawrence Fishburn from “School Daze”, command you to ‘Please wake up.’

Dawhud is an acclaimed producer, DJ, MC, Hip-Hop historian & aficionado and technologist since the early ’90s,  who has enjoyed living and traveling about the U.S.A.  Dawhud is a contributor for Seaspot Media Group.  He resides in Olympia, Washington