RAEKWON & SUPERNATURAL GET LIT IN SEATTLE

by Jose Gutierrez
in Uncategorized
0

I received the announcement August 18th, without any hesitation I purchased my tickets!  Wu-Tang Clan’s Raekwon (the chef) and Supernatural (freestyle King) were coming to the Nectar Lounge in Seattle.  One of the dopest lyricist in the industry was set to deliver his style of Mafioso rap.

October 8th finally got here; I arrived to catch the tail end of Seattle’s own up and coming hip hop artist Tasman Holloway, his lyrics echoed through the crowd as fans danced and grew hyped to his sound.  Supernatural hit the stage moments later with an out of this world delivery of his freestyle artistry.  His presence conquered the lounge as he began to spit utilizing the crowd for his bars.  I had the privilege of being part of this experience, recording his every word, my phone lifted out of my hand up in to the air capturing all as he presented to the crowd the phone cover that displayed Prince (RIP) he spit the words “let me give you a moment while I borrow your component look at Prince right there, brother that’s a moment”.  I was in a trance listening to this lyrical madman flow over beats that were as out of this world as his ingenious flow.

When ‘Supernat’ exited the stage, enters Raekwon the Chef .  He served up a lyrical gourmet meal taking us back down memory lane to 1993 with cuts from Wu’s debut album Enter The Wu-Tang 36 Chambers, paid tribute to ODB (RIP), and continued sets from ghosts’ albums as well as his solo album “Only Built for Cuban Linx”.  Almost every person in the audience knew all the lyrics to the songs, which made the show 10x more entertaining.  The gritty, grimy beats and the diverse lyrics that Wu has always delivered Raekwon brought to the table.  The only disappointment I had was not hearing any of the songs from his most recent album “Lost Jewelry and Fly International Luxurious Art”. 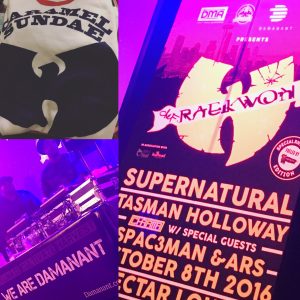 Until next time keep your eye on Hip Hop with me, Charli T. Peace and 1Luv.

The EYE On Hip Hop; Her Perception, Her Voice