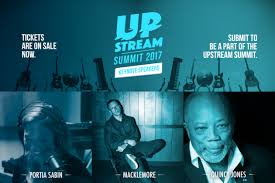 So we thought… ‘Gone are the days of ‘real’ music industry seminars, summits, conferences and festivals…’ But ‘skiiiiiirt’your brakes one time… Rethink the fallacy.  The innovative entrepreneur, technologist and mogul, Paul Allen again steps forward with another magnificent project as Seattle sets to host the first Upstream Music Festival in its historic Pioneer Square neighborhood May 11-13, 2017.

Next month, the three day music festival will be a ‘walking mixtape’ according to the official website, chock full of updates and notifications of who will be present, presenting and performing.  Notable guests/performers include Quincy Jones, Macklemore, Flying Lotus, Gabriel Teodros, Shabazz Palaces and the Moor Gang’s Gifted Gab and Jarv Dee to barely touch the surface of the more than ‘300 emerging artists’ and personalities that the festival boasts on its awesome lineup.
The festival will overtake the historic Pioneer Square neighborhood which was once legendary for its bustling nightlife, which in recent years has been surpassed by action in Bell Town, Capitol Hill and various other random locations throughout Seattle.  Upstream could not only be a monumental three-day event, but possible a shot in the arm to a pocket of Seattle which has seen better days in its legendary existence with classic venues like Trinity, Merchants Cafe and others over the years.  The 206 Hip-Hop community’s nightlife could certainly benefit from a resurgent location that would welcome consistent weeklies – an element missing since the loss of spots like the Art Bar’s memorable presence and Roc’Phellas Mondays at Contour.  Upstream’s potential impact inspires all kinds of possibilities.

Some of the features of Upstream include sessions on hit making in every era (Quincy Jones), panels on the changing role of the A&R, how to succeed in the streaming economy, the duality of local/global success and maintaining integrity (Macklemore) and operating in the Canadian music industry among many other notable sessions that look to be valuable for anyone seeking to up their game and stock in this tumultuous entertainment industry.   The grassroots credibility of Upstream is bonafide with ‘Guest Curators’ reading like a who’s who of Seattle and Puget Sound ‘factors’ to include Sub Pop Records, KEXP, The Vera Project, 206 Zulu, Hip Hop Artist Residency, Reign City, City Arts, Rain City Rock Camp, Nectar Lounge and way too many ore awesome partners with deep resumes and track records to name in this article.

Passes to attend range from $40-425 depending on what you’re trying to get into.  From one day passes to VIP Summit Passes, the options range based on the level of access desired.  Overall, with the loss and diminishing presence of once groundbreaking summits like the Hip-Hop Power Summit, New Music Seminar, Jack The Rapper, Core DJs Retreat and Rapsheet’s Unifying A Hip-Hop Nation – which all bore fruits, contracts and opportunity, it is gf interest to see what Upstream has in store, in an era where once powerful and intimate super-feats like SXSW have become overwhelmed by corporate presence and commercialism over content.

To learn more and participate with Upstream Music Festival 2017 – http://upstreammusicfest.com