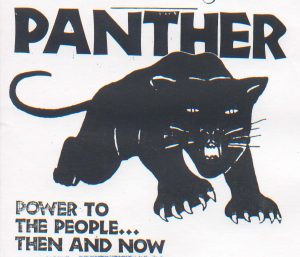 In the history of Black/African-American people of color in the United States of America and the African/Black diaspora, there have been struggles, numerous and severe.  From the presence and deeds of Crispus Attucks, Nat Turner, Phyllis Wheatley, John Brown, Denmarrk Vesey, Toussaint L’overture, Frederick Douglas, Harriet Tubman, Dessalines, Marcus Garvey, Booker T. Washington and many who would come after these illustrious persons – one thing has been consistent and that is the presence of fortitude in the face of seemingly insurmountable obstacles.  This never stopped any of those just named.

Facing opponents as daunting as the Imperial Knights of the Ku Klux Klan, The United States government and White Supremacy Systems has been a testament and example of how a people can withstand the onslaught of inhumanity and continue forward.  These same tests would be faced by A. Phillip Randolph, Paul Robeson, Adam Clayton Powell, Rev. Dr. Martin Luther King Jr., Rosa Parks, Billie Holiday, Malcolm X and many more.  At this stage – where the 1960s presented a window of opportunity after the rampant assassination campaigns enacted by the Federal Bureau of Investigation (FBI), after the dust began to settle (but many would argue that it never did), emerged a force of young, militant, intelligent and compassionate young Black people – they called themselves the Black Panthers.  With origins that are rumored to have had roots in Alabama, but substantiated in Oakland, California, the Black Panthers would wave a courageous flag of empowerment. 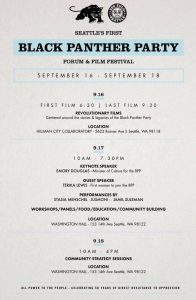 The flag of the Black Panthers represented a lot for Black people and still does, but also represented the greatest fear of White Supremacy – the vengeance of Black people and the justice that karma demands.  What followed was the continued campaign of disruption, interference, infiltration and assassination against the Black Panthers – effectively weakening and dismantling the once powerful and enthusiastic organization.  However, with each death there is a rebirth.

Today the Black Panther Party lives and continues a mission of justice, commencing with the First Annual Black Panther Party Film Forum and Festival in Seattle, Washington produced by The Black Panther Party with support and sponsorship of The Zulu Nation’s Seattle Chapter, 206 Zulu.  Seattle, was interestingly enough a notable outpost for the Black Panthers and remains a city where Black Panthers reside and work as community servants and activists.  This weekend’s activities include films (Friday), guest speakers (Emory Douglas, BPP Minister of Culture and Terika Lewis, the first female to join the BPP) and a community forum and strategy meeting to end the program on Sunday.  Some details and locations are available on the official film fest program flier.