by JaVohn Perry
in Uncategorized
2

Coming to Seattle for Ladies Night Out 7

Looking for something to do Memorial Weekend? Mark Saturday, May 28, 2016 on your calendar for what they call “the biggest white clothing party in the Northwest”. Ladies Night Out Vol. 7 is to be held at the ShoWare Center (in Kent) at 7:30 PM sharp and shouldn’t be missed. You might want to arrive early because doors will open at 6:30 PM.
This successful concert series, presented by Ocean Records, is back again with even more excitement. Year after year the Ladies Night Out series delivers enjoyable entertainment with several stars gracing the stage. This year is no different. The main focus of this concert series is typically Classic R&B, with occasional Hip Hop and even some comedy! The very first show was a hit with performances by K Ci & Jo, Ginuwine, Silk, H Town, Shai, Impressionist Jay Lamont, Comedian Ralph Porter, Monay, DJ Funkdaddy & was hosted by The Night Time Diva, Tiffany Warner. Ever since then, Ladies Night Out has been back by popular demand. This extremely favored series has already expanded to Fresno & Stockton California and is looking to expand to more cities. There is usually security and police presence to assist in making sure this event is enjoyable and drama free.

This year the eventful night is hosted by The Mayor of Rap City, Chris Thomas. With 7 acts and guest performances, this is sure to be a night to remember. Don’t worry about finding a babysitter because this is a show for all ages! Children two and older must have a ticket to enter. This is a great event for almost any occasion. Whether family outing, couple’s date or of course ladies’ night out with the girls, this will be a blast. Don’t want to wear white? No worries! Although this is an all-white affair, white attire is not required in order to attend.

Music will be provided by DJ Funk Daddy and there will be performances by some of the most influential R&B legends! Travel back in time to the Classic R&B days with this amazing performance lineup! Catch R&B sensation Tevin Campbell as he blesses the stage with his incredible voice. Tevin collaborated with the legendary Quincy Jones in 1991 to release his platinum-selling debut album, T.E.V.I.N. Most known for his two popular songs “Can We Talk” and “I’m Ready”, Campbell went double-platinum his second album (also titled “I’m Ready”). Another R&B Legend who will be performing at Ladies Night Out Vol. 7 is El Debarge. Known for the hits “Who’s Johnny” and “Love Always”, Debarge always delivers a unique spin to the high tenor register. This three-time Grammy nominee has collaborated with Tone Loc, George Clinton, Quincy Jones, Fourplay, and DJ Quik. This unforgettable memorial weekend will also include featured performances by All 4 One, Silk, Domino and Ruff Endz. Lovers LN will also be performing, which is a new R&B Supergroup consisting of Wingo of Jagged Edge, Chauncy of Backstreet, RL formerly of Next. Special guests The EriAm Sisters will be gracing the stage during this night of fun and entertainment as well.

There will be improved sound and lighting at this lovely event. Tickets are already on sale with prices starting at $32. A 25% Discount On tickets is being offered on tickets, but expires April 1st at Midnight. Get your discount but using the Discount Code- OCEAN. Get your tickets before they sell out! VIP and view seats are already sold out for this popular show. 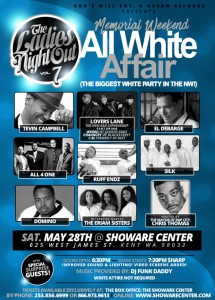 Kehinde Wiley: A New Republic is putting African Americans in a New Light

Ice Cube is Back with Barbershop 3: The Next Cut

Ice Cube is Back with Barbershop 3: The Next Cut