It seems difficult to believe that a    swift 15 years has just swept by since David Simon and his team re-introduced another angle of perspective to view one of this country’s truly All-American cities – Baltimore, Maryland – as portrayed in one of television/cable’s most celebrated shows, The Wire. 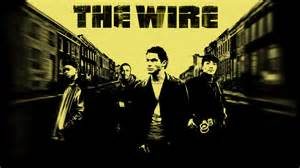 David Simon as a producer and creator of HBOs, The Wire, which took such a realistic and equally imaginative and captivating look at the beauty, grit and culture of Baltimore had done this once before with the help of Charles S. Dutton and a sterling cast of actors, with the awesome in-your-face docudrama, The Corner – also showcasing the difficult world of substance abuse/addiction, family and fragmentation of life in Baltimore.

The Wire was an unmatched animal, however – go beyond the visual power and efficacy of groundbreaking shows like New York Undercover in the 1990s – smoothly blending star power, with cutting edge fashion, relevant and present subject matter and social commentary, breaking music and launching and fortifying the careers of amazing actors.  To say nothing of the character development in both The Corner and The Wire, each show rippled  with integrity, credibility and defined what it meant to be ‘must-see-TV’.

Keeping his finger on the pulse of the city and injecting a vivid imagination and hypothetical scenarios would find Simon developing memorable characters and situation which reign in the minds of viewers and fans ten full years after the show ended successfully.  Who can forget Omar (Michael K. Williams)?  How about the emergence of characters like Bunk, Proposition Joe, Cheese, Stringer Bell, Senator Clay Davis, Bubs and way too many more powerful performances to recount in this moment of elated memory 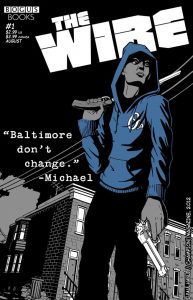 Omar, the homosexual vulture (Dope boy stick-up artist and show-favorite among fans) with his warning whistle, fearless walk through the murderous city leaving dope-boys shivering in their drawls and penchant to rack a shotgun while spitting game, knowledge and living by a code that garnered him respect on the show and with viewers.  How about the philandering antics of Irish-American non-stop, murder-police detective, Jimmy Mcnulty (Dominic West)?  How about the creation and development of ‘Hamsterdam’ – the designated dope zone, where drugs could be sold, consumed and all without police enforcement of the law to provide a safe place for the trade to crack off while protecting and cleaning up other sectors of the city?

As a music professional, I was able to personally feel the impact of The Wire, as not only did the music supervisory team push the hottest music on the show, along with the cutting edge fashion from brands like Enyce, Phat Farm and many others, but entire official mixtape campaigns (when mixtapes were still impacting corporate decision-making) were launched by promo companies like Cornerstone Promotions once headed by current Def Jam executive, Chris Atlas. 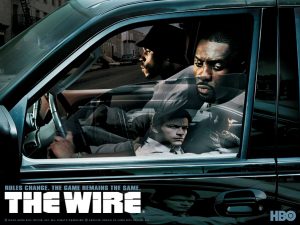 culture itself and surely causing native Baltimorians to bear the unending questions of those who viewed the show but never visited the city.  From the portrayal of the unions, the Greeks, Black people, the police, [email protected], children and schoolmates, the emergence of the ‘No Snitching’ fad can be at least partly attached to The Wire, participants the assassins – The Wire did what TV had been made to do – capture the attention and loyalty of viewers.- simultaneously and almost magically depicting realism with vivid imagination, with a historic city as the back drop.

Those who are on the ground in the All-American city of Baltimore can better tell you exactly how the city is doing today, following tragedies like the death of Freddy Gray, the ensuing riots and the fact that murder is still a growth industry in various cities – the issues depicted on The Wire were of course emanating from the brilliant minds and performances of David Simon, his team of creative people and the actors,  but for many people – the show captured five plus vibrant years of a new century from 2002-2008. 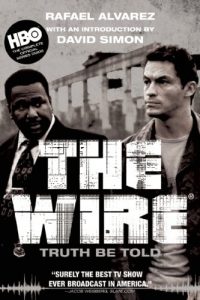 Fifteen years after its birth, The Wire remains a favorite of viewers and can be measured with the test of time as the writing is still cutting edge, the character development is second to none and when a TV show is anchored by a book, that speaks to the power of attraction, causing those who would rather open a bag of chips and crack open some drank and watch – to pick up a book and read.  Congrats to The Wire on its longevity and impact on culture.