People often want to play ‘escapism’ when it comes time to call people to the front, to task… to arms.  Given the lessons and tragedies of history, I am finding it impossible to stand still and watch as Black people (and others) throughout the world are still being comodified and treated as assets in the financial markets.  As abolitionists and liberators – for those of us who claim such titles – what should you and I – we… do?

After witnessing via study and mostly clandestine media efforts/coverage, the tragedies of the inhumanities of ‘involuntary’ sex trade and the ‘White (mostly Eastern-European) slave trade’ happening right now – like, at this moment somewhere – with some level of knowledge and allowance, I have to pause and ponder.  These should not be headlines we turn the page or change the channel away from.  What kind of people are we to discuss the ravages, inhumanities and hells of slavery from yesteryear, but know of its existence right now and basically, shrug it off?  What kind of people does that make us as humans and even more, I look at Black people and people of color and pose this question.  The question intensifies for me when I am privy to exclusive reports presented by CNN showing the age-old ‘business’ of slavery being enacted and continued by people in Libya, upon the backs of Black people from places like Ghana, Mali, Nigeria, Niger and other lands in Africa, who are attempting to escape dilapidated living for the relative security of the lands of the colonial masters of Europe.  These efforts to escape are being thwarted in significant number (ONE is one too many for me, I am not negotiable or debatable on this figure – yet there are many more people than one) by some people taking refuge in the former most advanced, now most-failed nation on the continent of Africa – Libya.

Libya’s story is one for the ages – having been a former frontier of colonial manipulation through the mid-1900s, until Colonel Muamar Gadaffi’s revolution upendended (to the dismay of many ‘Western’ powers and people of foreign ethnicity) the colonial stranglehold on the oil-nation.  After a saga of decades-long conflict and questionable accusations against Libya and finally a series of mid-2000s false friendship gestures by ‘Western leadership’ who had economically, politically and socially isolated Libya based on allegations of terror and support of enemies of ‘The West’ for nearly 30 years, the long-lasting episode ended with Gadaffi’s road-side assassination in late 2011, recorded live for all to butter popcorn and pull up a seat and watch.

Infamously and karmically (for her presidential campaign), former Secretary of State, Hillary Clinton would chuckle, giving away her position of complicity with a standing leader’s public murder, that, “We came.  We saw.  He died!”  Smilingly.  With that bit of cursory history – what began happening with the fall of Gadaffi was not well-covered on mainstream media outlets, but with a litte bit of digging, one could witness the historic racism inflicted on Black Africans by their much more light-skin Arab-African countrymen.  I saw and read the accounts of these atrocities as they occurred in 2011 and up to this moment with this inexcusable slavery business being documented.  During Gadaffi’s reign, Black people were acknowledged as the ‘original Libyans’ of ancient times and protected as citizens of the nation.

So, I say that to say this… What should the descendents of Black enslaved people do?  What should be our positiion?  Is it not our problem and issue to forcefully address?  How about our other members of the human family who also, sit and know and watch, while humans living in desperate conditions (ALL caused by the remaining impacts and scourges of European and Arabic slavery and colonialism) scurry for the shores and comforts of their former colonial masters in Europe only to be tricked and treated to a world of treachery and hell on Earth.  If ever there were an effort and cause worthy of violent intervention and the unleashing of hell for Black people and people of color and the entire human family (those who actually believe in such a thing) to engage in – I happily, upon the memories and shoulders of my ancestors, say this is one.

Otherwise, what is the point of revisiting, studying, analyzing and demonizing the Trans-Atlantic slave trade, which is responsible for generating the seemingly unending weatlh of nations in the Western Hemisphere and their parental nations of Europe, in such a short span of time?  Should we be discussing reparations, if we cannot or will not intercede in the rescue of distant family members – now?  To sit and watch, knowing that this is happening, I find to be the epitome of a selfish, self-centered, hypocritical and impostoresque existence.  I think standing armies from all over African nations and militias of the diaspora should be at the gates of Libya’s slave-holding operations (and any other known slaving ventures around the globe) as a gesture of sincerity and solidarity to end this institution – anything else makes historical analysis and ridicule of those who enacted and have benefitted (and are benefitting) from the institution of slavery, appear duplicitous and insincere – completely.  #SoWhatChuWannaDoWiddIt? #MyWORD.

The following link is a sampling of what you need to know to engage in this conversation, informatively: http://www.cnn.com/2017/11/14/africa/libya-migrant-auctions/index.html

What The Dilly Yo?! with Jose S. Gutierrez Jr. 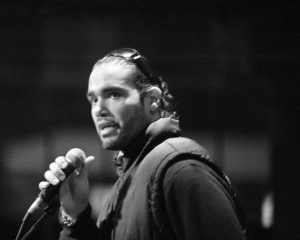 Jose is the Editor-In-Chief/Executive Editor of Seaspot and Executive Consultant.  He has been a broadcaster since 1989 and is a professor and educator in the humanities, business, philosophy, history, culture, music and media at multiple institutions.  He is an active artist/DJ/MC/Griot/producer and member of The AmaZulu Nation, Temple of Hip-Hop and Union of Hip-Hop.  He calls The LO (Lacey/Olympia) area in Washington, home.

COLLEGE FOOTBALL POLLSTERS KEEP ‘BAMA AT THE TOP OF THE PILE; PAC-12 IS NIXED FROM PLAYOFFS?

COLLEGE FOOTBALL POLLSTERS KEEP 'BAMA AT THE TOP OF THE PILE; PAC-12 IS NIXED FROM PLAYOFFS?