WHAT THE DILLY, YO?! with JOSE S. GUTIERREZ JR.: KAEPERNICK STILL AIN’T GOT A FOOTBALL JOBBY JOB?!?!

It is official football season (for some of us who study, follow, analyze the game and play it on playstation, xbox and other systems – it never ends) and everyone who is into the game is checking for their team’s progress in camp, seeing what coaching and strategic moves are being made and which players are being made and cut… And still today in the first week of August 2017 – one awesome talent remains interestingly unsigned and without a home in the National Football League.  Yes, Colin Kaepernick is not on a team and it is being reported that many fans are voicing their undesirable leanings away from him. 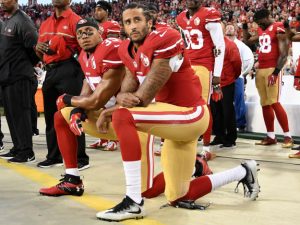 This is an awesome development to ponder as it is largely agreed that Kaepernick’s being overlooked as a free agent signee after choosing to opt out of his contract with (my beloved) San Francisco 49ers at the end of the 2016 season, has nothing to do with his on-field performance, but rather his off the field stance… Or better yet, kneeling.  At the outset of the 2016 NFL season, Kaepernick seemed to have a life-changing experience and awakening, as he has demonstrated a need to have his voice heard among the (not new, but) trending abuse of African-Americans, other people of color and marginalized groups at the hands of some law enforcement agents and agencies.  As a result of his distaste for these many incidents, many of the time resulting in no disciplinary or legal actions in cases like Philando Castille, Trayvon Martin, Tamir Rice and Sandra Bland among too many more to mention in this commentary, Kaepernick decided to take a knee during the singing of the United States National Anthem, a ballad wherein it is a traditional expectation that the entire stadium’s population stand at attention – often with a hand over the heart during this song.

Aside from the original composition of lyrics written by Francis Scott Key being ripe with racist, anti-Black, Pro-Slavery and ‘White Supremacist’ rhetoric (you’ll have to do a bit of research, because this is rarely taught and most people seem to be unaware of this fact) – aside from these facts, like others in the past who have protested the seemingly and at times hollow words of ‘justice, adoration and allegiance’ to the flag – people like Mahmoud Abdul Rauf, John Carlos, Tommy Smith, Muhammad Ali, Ice Cube, Young Jeezy, X-Clan and more have been outspoken and outstanding in their demonstrations and protests of what the flag has been proclaimed to symbolize and its failings to empower people based on the principles it is supposed to represent.  With these factors in mind, Kaepernick took a knee – and seemingly the reason for his taking a knee was overshadowed by the knee alone.  He has been supported by factions and also berated by others… Pro-flag folks are disgusted by his criticism of Old Glory, while supporters see and agree with his rights, if not his entire point. 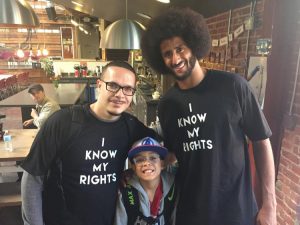 What’s The Dilly, though, Yo?!  There are currently racists, there are currently criminals, there are currently abusers and losers throughout the NFL and other major athletic leagues and associations, not to mention other corporations and the U.S. government – some are revealed, some are yet to be.  So, essentially, I ask the question – “Is the game about winning or profit?” and if these results are any indication, it is clear that commercial success trumps talent, even the right for a person to express him/herself.  It happens at all levels.

And as for my personal position?

The National FAKEBALL League… I am disappointed and not an ounce surprised with the loser-mentality of the owners, executives and coaches in the NFL who can concoct every reason thus far, not to sign Kaepernick, but bring in Arena League, Free Agent signees and others (all whom deserve an opportunity). For all the ‘patriotic’ rhetoric and ‘good-for-the-game’ talk, Colin Kaepernick is expressing his 1st Amendment Rights and has loudly expressed his support for soldiers, but not necessarily those who send soldiers into to weakly-strategized campaigns, theaters of war and unwinnable war zones… If you had any true sense of justice and courage… You would support a man who STANDS/KNEELS upon a principle, but you are AFRIAD and PETRIFIED BY FEAR of what people today think and say about your own ‘patriotism’ – as the people the past were afraid and cowardly and threatened in the face of protests by Muhammad Ali – THE GREATEST.

Future History will prove you to be hypocritical posers just like those who criticized ALI. It is obvious to anyone who KNOWS FOOTBALL (not you plastic fans, ‘opinionators’ and those who wish you knew football) that Colin Kaepernick can BALL out and is certainly qualified for at least a 2nd or 3rd string position as a quarterback in the NFL, if not starter… and he is laughably waaaaaaaaaay better than some of these ALSO-RANS being signed to training camps… You cowards reveal your true character and non-desire to play the best player (who is guilty of no crime, infraction, violation) by avoiding this superior athlete with high character to challenge abuse of legal/law enforcement duty. The fact that you are against his stance can leave plenty of room to infer that maybe you so-ccalled people condone and are complicit in the abuse of citizenry by legal authority figures. And if so, that is GREAT to know… 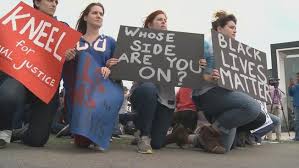 Since his apparent ‘shut-out’ from being sought as a football player, Kaepernick has endeavored in multiple charity and community service programs including convening a ‘know your rights campaign’, and educational camp in Harlem, NY, a program to support homeless, indigent people and recently released inmates as well as remarkable effort to send more than 60,000 pounds of food and resources to the war-torn lands of Somalia via Turkish Airlines.  He has also been berated and criticized by former colleagues and notable public figures like Ray Lewis and Michael Vick (You sound like a #NewSlave even opening your mouth in criticism of Colin Kaepernick, Vick – you barely escaped permanent public persecution, yourself – for being CONVICTED.  The irony is comical   ).

Black Panther: You saw the movie, now what?

30SOMETHING & SINGLE with RANNY KANG: THE COCK-BLOCK OF ENTITLEMENT

30-SOMETHING & SINGLE WITH RANNY KANG: DO YOU REALLY WANT A BOO – OR IS IT JUST THE HOLIDAY BLUES?

30SOMETHING & SINGLE with RANNY: HOW TO HEAL A BROKEN HEART (WITHOUT WHISKEY)

30SOMETHING & SINGLE: THE LOVE AND RELATIONSHIP COLUMN… AND RANNY

ANOTHER ECLECTIC LINE UP FOR SEATTLE'S BUMBERSHOOT MUSIC & ARTS FESTIVAL 2017